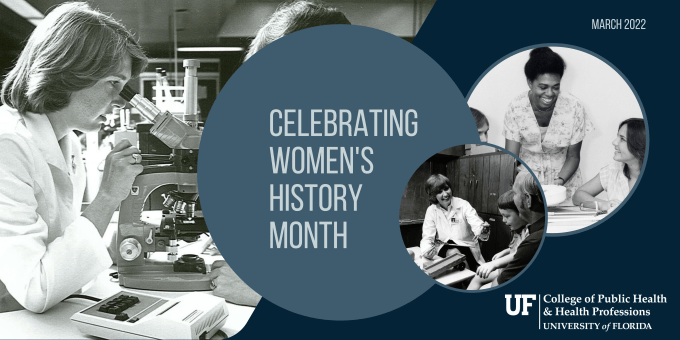 Editor’s note: This story originally appeared in 2008 in a publication recognizing the College of Public Health and Health Professions’ 50th anniversary.

There were no department founding fathers here in 1958 — just a trio of women each at the helm of the first three departments in what was then known as the College of Health Related Services.

Physical and occupational therapy as well as the medical technology fields historically employed more women than men. As thousands of men returned wounded from World War I and II, the demand for skilled health workers increased. Although the college’s women leaders enjoyed positions of influence, through the decades they learned to manage social challenges such as gaining equal recognition and finding a balance between work and home life.

Lela Llorens, Ph.D., who is believed to be the first African American occupational therapy chair in the country, said she was attracted to the profession because she wanted to help people and was grateful the field offered leadership roles where other health disciplines fell short. When Llorens joined the UF faculty in 1971, Jantzen mentored her and helped her adjust to the administrative nuances of being a professor at a large university.

“I knew she was going to retire at some point,” Llorens said. “I made her agree to stay five years longer because I wanted to learn from her. She was a strong, no-nonsense woman who took a mentor role with people who worked with her.”

Llorens said she worked to make her voice heard during interdepartmental committee meetings, especially when she was the only woman.

“There tended to be lower expectations for women, especially if you were the only one in the room,” Llorens said. “It was always amusing to me to think I was going to surprise somebody with my ideas.”

Eileen Fennell, Ph.D., a professor emerita in the department of clinical and health psychology, was a wife and mother of two young children when she entered the college’s clinical psychology doctoral program in the early 1970s.

While the women’s movement made it more acceptable to pursue higher education, a grueling schedule didn’t make it easier to juggle life as a full-time student and mother.

“I remember what it was like to feel like you were stuck between a rock and a hard place,” she said. “As the years went by it got better, and it got a little easier for new generations to manage those things.”

Fennell remembers waking up before sunrise on weekends to drive her children to their swim meets by 7 a.m. and cheering them on to victory in between studying for exams by the poolside.

“I can remember sweating at times thinking, ‘What am I going to do?’” she said. “My sense of it was that the faculty was still adjusting to having women with families in graduate school.”

Executive Associate Dean Stephanie Hanson, Ph.D., who was recruited as the college’s first female associate dean in 1996, attributes part of her success to the evolution of women’s roles.

“Previous generations paved the way for the broader acceptance of women in leadership positions in the United States,” Hanson said. “I am fortunate, especially as a single parent, to have benefited from the hard work of previous generations and the men and women today who support my work as a college leader.”

Claudette Finley, M.S., an associate professor emerita in the department of physical therapy, says she never felt the proverbial glass ceiling hanging over her head. Opportunities existed for those who worked hard and wanted to advance their careers.  The student applicant pool, however, was primarily female, something that was illustrated within classrooms. Finley remembers teaching a class of 25 students in the late 1960s — only one or two of the students were male. By the time she retired in 2002, the male to female student ratio was even.

“I’m really proud of our college and what it has accomplished,” Finley said. “Back then, I got to step into that department and see role models I could relate to. It showed me it was possible to do this.”