The UF College of Public Health and Health Professions hosted its 33rd annual Research Day on Feb. 6 at the Curtis M. Phillips Center for the Performing Arts. More than 230 guests viewed 61 poster presentations by graduate students and postdoctoral fellows and associates. 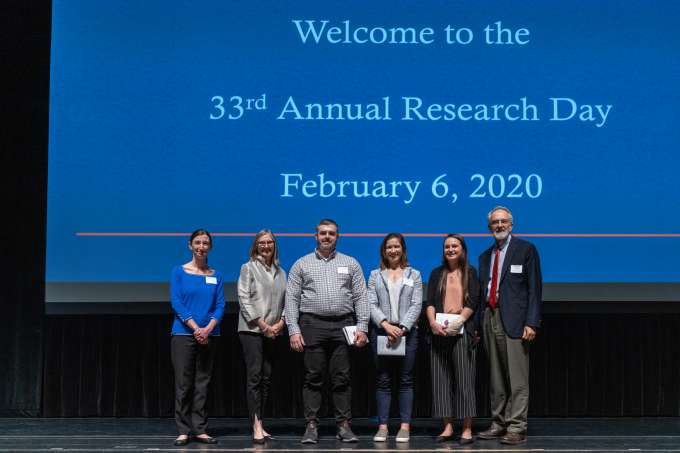 A physician, epidemiologist and author, Galea is chair of the Board of the Association of Schools and Programs of Public Health and past president of the Society for Epidemiologic Research and of the Interdisciplinary Association for Population Health Science. He previously held academic and leadership positions at Columbia University, the University of Michigan, and the New York Academy of Medicine. Galea has published extensively in peer-reviewed literature and is a regular contributor to a range of public media, and has been listed as one of the most widely cited scholars in the social sciences.

Galea began his presentation by highlighting improved life expectancy in the U.S. over the past decades, largely driven by drops in smoking rates, resulting in fewer cases of heart disease.

In a comparison to other high income countries, the U.S. is four and a half years behind in life expectancy, Galea said.

“It’s a good time to be alive. It could be so, so much better,” he said. “The one element of this that we do not talk about enough is this notion of health haves and health have nots. I want to make a case that you cannot think about health without thinking about who is benefiting on health and who is not benefiting on health.”

Galea described three barriers to action on the root causes of health inequities: the politics, the science and the story. Politics has come to color science and that’s not a good thing, he said.

“Science should be able to lead with data,” he said. “Data that has clear purpose behind it and the science of population health has a purpose, which is aiming to illuminate what improves the health of populations and we need to make sure that we preserve that.”

Galea said the role of those in public health should be to insert health in all we do, to make the case with science and the moral argument, and to tell the story of the public’s health.

“It is our job in a school of public health to make sure that you leave fully charged with and know how to generate new knowledge and to make the moral argument,” he said.

The lecture is also available to view via livestream at https://bit.ly/3aFqeS2.