Every Monday, for three hours, a group of UF undergraduate students meets at UF HealthStreet to learn how to develop research questions, analyze data, and write and present research findings. It is all part of an effort to give undergrads the rare opportunity to publish a scientific paper as a first author and put them on a path to graduate school and a career in research.

The Study of Teen Opioid Misuse and Prevention, or STOMP, Research Lab recruits and trains undergraduate and predoctoral investigators from historically underrepresented and/or disadvantaged backgrounds to go on to research careers in public health and medicine. It is the brainchild of Micah Johnson, Ph.D., a postdoctoral fellow in substance abuse research at the department of epidemiology in the College of Public Health and Health Professions and the College of Medicine.

Through STOMP Lab, Johnson hopes to develop a pipeline of budding researchers from diverse backgrounds, many of whom would have never considered a career in research because they haven’t received training, resources or exposure to research. Closing the racial gap is particularly important in drug abuse research, he said.

“African American and Latino researchers are very underrepresented in drug abuse research,” Johnson said. “This is interesting given the fact that African American and Latino populations are not just disproportionately affected by the drug crisis, they are the most harshly penalized, whether it be through the legal system or simply through the effects on communities.”

Johnson’s grassroots efforts to launch the lab began last spring. He walked around campus during lunch breaks, talking to students, asking questions about their interests and convincing those he thought would be a good fit to join the lab. It wasn’t easy in some cases, he said.

“I experienced extreme fear and extreme degrees of imposter syndrome from students,” Johnson said. “Research frightens people, especially quantitative research and statistical analyses. The most difficult piece of recruiting was overcoming their psychological burdens, but that began to go away because once you see eight people who look like you in a laboratory, it’s no problem being number nine. When I was trying to get the first four, it was very, very difficult.” 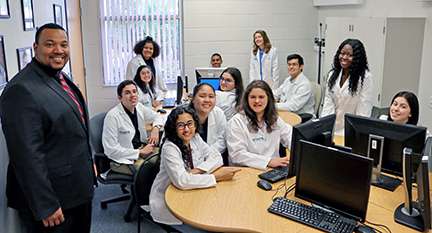 Sarah Clerjuste, a third-year mathematics major who is originally from Haiti, was one of the skeptics. Johnson spent weeks trying to recruit her to the STOMP Lab. A fear of writing was holding her back.

“I thought research would be just a bunch of writing,” she said. “I always loved math, but hated English class. But then I learned that it’s not all about writing essays. There are a lot of aspects involved in research.”

The STOMP Lab began last June with about 10 students. The lab now numbers 30. Several majors are represented, including business, sociology, African American studies and family, youth and community sciences. Many are biology majors on a pre-med track.

“Half of the STOMP lab students are planning to go to medical school and the other are on the path to a Ph.D.,” Johnson said. “It was rough to convince people they could get a master’s degree, much less get a Ph.D., and these are highly successful students who should be on this track. This is due to imposter syndrome and a lack of conversation around research careers, but it is happening now.”

Gordon Beaucejour, a first-year business administration major from Orlando who plans to go to medical school, was drawn to the lab for its research focus on issues affecting minority groups.

“This is my way of giving back,” he said. “It’s another way to volunteer, but also to learn more about research while helping others.”

The STOMP Lab focuses on health and behavior outcomes using statistical analyses and qualitative tools to investigate the prevalence, patterns, predictors and prevention of adolescent opioid misuse. Lab members mine data from the Florida Department of Juvenile Justice that includes information on more than 100,000 adolescents with more than 500 variables. Each lab member develops his or her own research project, using one of several topics Johnson suggests, or works with Johnson to develop a research question that aligns with their personal interests. Recent projects include predictors of substance use disorder treatment outcomes; parent and sibling substance use and the likelihood of opioid misuse; sex abuse and exposure to violence and opioid misuse; and the link between detention placement and opioid misuse.

Johnson provides a template for lab members that puts them on track to select a research topic, conduct literature reviews, analyze data and write a journal article on their findings over a six month period. In addition to the weekly group meetings, Johnson mentors each student individually.

Dylan Shaw, one of the first members of STOMP Lab and the first in his family to go to college in the U.S., studied family structure and past 30-day opioid misuse. The paper on his findings was published earlier this month by the journal Substance Use and Misuse. 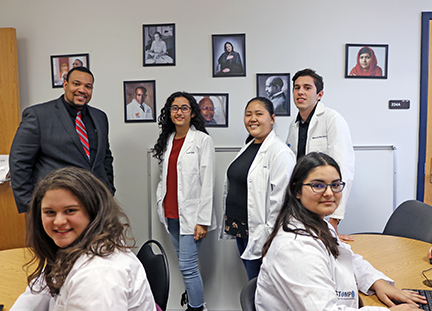 “As an undergrad you expect to come into a lab and do menial tasks like monitoring lab animals or starting cell cultures. Most undergrads won’t publish papers as a first author,” said Shaw, a third-year biology major who plans to attend medical school. “By doing research through all the steps and writing the entire paper alongside Dr. Johnson, I have a holistic feel for research instead of one small bit. I’m much more prepared for academic research in terms of reading, understanding and interpreting it.”

Clerjuste is still no fan of writing, but for the first time, she envisions herself as a Ph.D. student, perhaps in biostatistics, and eventually, as a college professor. She recently submitted her study on the link between somatic complaints and opioid misuse to a peer-reviewed journal.

Clerjuste and a few of the STOMP Lab members receive stipends through the Ph.D. Preparatory Project, a program funded by the UF Graduate School. Financial support also comes through the University of Florida Substance Abuse Training Center in Public Health, a National Institute on Drug Abuse T32 training grant directed by Linda Cottler, Ph.D., M.P.H., dean’s professor in the department of epidemiology and the college’s associate dean for research, and from the department of epidemiology. With more support, Johnson hopes to expand the number of lab members receiving stipends and offset costs of conference abstract submissions, conference travel and basic lab equipment.

At a research symposium last month, STOMP members presented oral and poster presentations on their projects to campus faculty, graduate students and administrators. Even Johnson, who had worked with students on all aspects of their presentation skills, including handshakes and eye contact, was amazed at how well they did.

“What has surprised me is their ability to grow,” Johnson said. “I think this is where academia goes wrong with first generation people. They look at them and see this person can’t write and they reject them as if they’ll never learn to write. Or, they look at this person and say this person hasn’t done any research as if that person can’t do research. The students have shown me that not only can they get there and meet the requirements that you set, if you guide them through it, they can exceed them and they will do it quickly.”