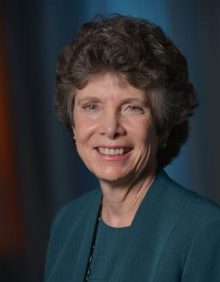 A paper co-authored by Susan Nittrouer, Ph.D., a professor and chair of the department of speech, language, and hearing sciences at the UF College of Public Health and Health Professions, along with colleagues at The Ohio State University, has been selected for the 2018 Editor’s Award, presented by the Journal of Speech, Language, and Hearing Research.

The Editor’s Award is given annually to the most impactful works that meet the highest quality standards in research design and presentation. The team’s paper, “Speech Recognition in Adults With Cochlear Implants: The Effects of Working Memory, Phonological Sensitivity, and Aging,” was published in April 2017. It describes the results of a study that assessed language abilities in people who received cochlear implants as older adults, after years of experiencing hearing loss.

The researchers found that among implant recipients, working memory was only slightly worse compared with a group of age-matched controls with age-normal hearing. However, speech recognition sensitivity among the older adults with implants was highly impaired, suggesting that language abilities need constant updating through sensory input, Nittrouer said.

“Almost without exception, we will all experience some decline in hearing with age,” said Nittrouer, the paper’s senior author. “This study emphasizes the need for treatment so that hearing loss does not impact older adults’ ability to understand language.”

Nittrouer and the other study authors, Aaron Moberly, M.D., Michael S. Harris, M.D., and Lauren Boyce, will be recognized November 14 at the Researcher-Academic Town Meeting held during the American Speech-Language-Hearing Association’s annual convention in Boston.