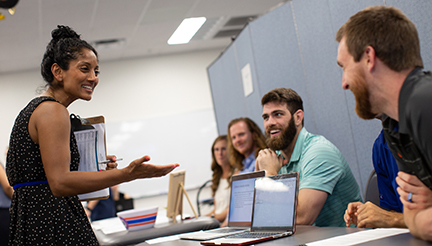 Alappattu, who received her doctor of physical therapy and Ph.D. in rehabilitation science from the College of Public Health and Health Professions, began her service to the profession when she was a UF DPT student. She led the reinstatement of the Florida Physical Therapy Association’s student interest group and its conclave. Her involvement continued after graduation with terms on the FPTA’s board of directors and she is currently in her second term as the association’s vice president. She also served as co-chair of the FPTA’s Task Force to Modernize the Practice Act. The group’s efforts led to the passage of important Florida legislation that increases patient access to physical therapy.

At the national level, Alappattu is the director of research for the APTA’s Section on Women’s Health. In this role, she improved the research grant process, led the establishment of a new grant opportunity and oversaw the transition of the new editor-in-chief for the Journal of Women’s Health Physical Therapy. She also serves as a Florida delegate to the APTA’s House of Delegates, the association’s policy-making body. The APTA named her an Emerging Leader in 2015. 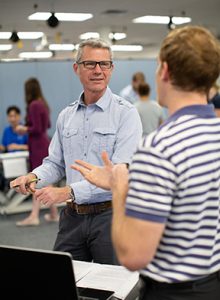 Bishop, a graduate of PHHP’s doctoral program in rehabilitation science, is an international expert on musculoskeletal pain. His current research examines mechanisms behind the transition from acute to chronic pain, and the influence of factors between providers and patients in shaping patient outcomes. He is the author or co-author of more than 100 articles in high impact journals and he is frequently called upon to present keynote addresses at meetings all over the world. He is the 2017 recipient of the FPTA’s Award for Scholarly Impact on Practice.

He has also received numerous state and national awards for his teaching, including the James A. Gould Excellence in Teaching from the APTA’s Orthopaedic Section.

Last fall, Bishop was invited to speak at a meeting of the Florida Senate Opioid Commission where he presented research on the role of physical therapy in managing pain and emphasized the importance of early access to physical therapy as an alternative to opioids for acute musculoskeletal pain. He is now working with the FPTA and their lobbying team to offer recommendations for bills in the Florida House and Senate that include provisions for physicians to receive education about the use of non-pharmacologic alternatives to opioids, including physical therapy.

“Mark is a tireless advocate for the physical therapy profession through his service,” said Steven George, Ph.D., P.T., a professor in the Duke Clinical Research Institute and the department of orthopaedic surgery at Duke University. “I have met many people in my professional travels, but none who embody what it means to be a physical therapist quite like Mark Bishop does.”

Alappattu and Bishop will be recognized at the APTA’s NEXT Conference and Exposition in June in Orlando.