The College of Public Health and Health Professions is pleased to announce upcoming PHHP Distinguished Scholar Lectures for the month of October. 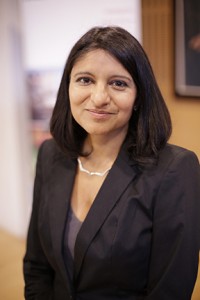 Sonia Saxena, M.D., will present “Tackling the problems of obesity in children: lessons from the UK” on Wednesday, Oct. 15 at noon in the HPNP Complex, room G101. Saxena is a clinical reader and general practitioner academic who runs the Child Health Unit at Imperial College London, UK. She has championed the role of the general practitioner in tackling medical problems through better prevention and early diagnosis and has a strong track record in research examining childhood obesity and early cardiovascular risk. She has led studies reporting rising medical problems in British children who are obese, evaluated the impact of the National Childhood Measurement Programme in England and developed guidance and tools for general practitioners to assess and advise families with children who are overweight. She led a public health campaign to raise awareness of child obesity and contributed to the UK government’s plans to add health education on food and nutrition to literacy and numeracy core curriculum in British schools.

Saxena’s lecture is hosted by the college’s department of health services research, management and policy.

Juan E. Gilbert, Ph.D., will present “Societal impacts through research and diversity: Who we are and what we do” on Thursday, Oct. 23 at 2 p.m. at the HPNP Complex auditorium. Gilbert is the Andrew Banks Family Preeminence Endowed Chair, the associate chair of research at UF’s computer and information science and engineering department and he leads the Human Experience Research Lab at the UF College of Engineering. He is a fellow of the American Association of the Advancement of Science, a national associate of the National Research Council of the National Academies, an ACM distinguished scientist, and a senior member of the IEEE. Gilbert has research projects in spoken language systems, advanced learning technologies, usability and accessibility, ethnocomputing (culturally relevant computing) and databases/data mining. In 2012, he received the Presidential Award for Excellence in Science, Mathematics, and Engineering Mentoring from President Barack Obama, and he was recently named one of the 50 most important African Americans in Technology.

Gilbert’s lecture is hosted by the college’s Diversity and Inclusion Committee, and is held in conjunction with PHHP Diversity Day.

The College of Public Health and Health Professions’ Distinguished Scholar Lecture Series brings some of the nation’s top health professions and public health researchers to the University of Florida campus. Lectures are free and open to the public.